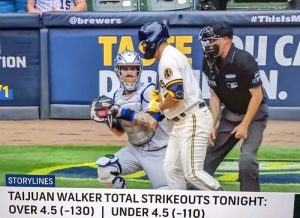 A few months ago, Dad weighed in on the idea of avoiding a sucker’s bet. It’s the kind of topic that Rent A Dad (presumably, any dad) would have opinions on, and wish to share.

At the time, the bet was simple to understand, but you needed to have some specific familiarity with statistical analysis in baseball for it to really make sense. Not this time. This lesson in avoiding a sucker’s bet is as simple as understanding that betting is never actually a great idea unless you’re the house—or at least have a way of similarly turning odds in your favor.

For example, Dad was in college during the 1980 Winter Olympics and when a kid who didn’t realize that the hockey game being shown on TV was a tape delay and everyone else in the room already knew who’d won …

In the image above, the betting service being pimped in the baseball game being represented was presenting the opportunity to wager on how many batters one of that day’s starting pitchers would record. The “under/over” was 4.5, meaning that you could bet either that he’d strike out four or fewer opposing batters, or at least five.

And either way, the house would win.

The real point here isn’t that Dad thinks you’d do better not to gamble; if you have the means and can keep your losses in a place that doesn’t bother you, then have fun! Even better, though? Figure out how to be the house, rather than beat the house.

At that point, it’s someone else placing the sucker’s bet and you who wins.