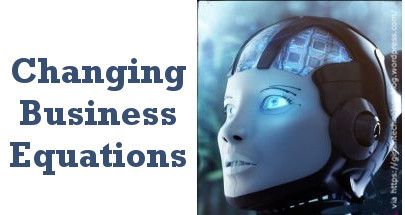 When I started writing here, Answer Guy Central was all about business change. I mean those word literally; changing business was the topic we covered. But time passed. I believe in drinking my own Kool-Aid, and there came a time when “business change” wasn’t descriptive enough of what we do—even though it’s ultimately what we’re paid to make happen at our client businesses.

Business change is never far from my mind. I see it everywhere, and yesterday James Altucher smacked me upside the head with a business change that I’ve been aware of but haven’t said much about. There are changing business equations in education. Big ones.

Altucher is one of the best business writers alive and I actually pay attention to what he says. Nevertheless, James has shown up here just once before, when his Ultimate Cheat Sheet to Online Dating got me thinking about changes happening in the business of hooking up.

Yesterday, Altucher was complaining about his daughter being off to college. I Failed to Prevent My Kid from Going to College is a typically entertaining Altucherism, but for me it was more. I believe in higher education, but I also believe that the business change higher education once represented has been replaced. And changing business equations couldn’t be a more apt way to describe the situation.

As I pointed out to Mr. Altucher, he hadn’t really failed to keep his daughter from going to college. What he failed at was explaining in terms she understood why there were other choices that in all likelihood will serve her better somewhere down the road.

For quite a few years, college has been the default next step for kids who could afford it. It’s not a bad step, of course, but the number of unemployed college graduates illustrates that college is now often a stopgap for kids who just don’t know what to do next. Your Bachelor’s degree doesn’t get you in nearly as many doors as one minted in my day would.

One of the changing business equations in play here is that the world simply doesn’t need so many people with “higher level” general educations. Going on for a more specialized education, like law or medical school? Most graduate programs require you to have gone to college before they’ll admit you. Just doing what’s next because Mom and Dad can afford it? No longer a great plan.

Josie Altucher’s failure to understand what James was trying to tell/teach her reflects how hard “getting outside your comfort zone” can be. “Figure something out; don’t just tread a worn path” is too complex an idea for most 18-year-olds.

But that changing educational equation is exactly like changing business equations.

Change isn’t necessarily hard; in fact it can be liberating—even fun. You just need the nerve to give it a try. If you want a gentle push, I’m right here.