Get ready to pay for streaming videos to which you believe you already have access. And keep on paying. Look, it’s a watchlist videos scam!

In personal terms, Your Rent-A-Dad has seen this before. Some years ago, one of my kids subscribed to HBO through Amazon Prime Video—while we were already subscribed through our cable TV provider. She did this unintentionally, and without any thought; while browsing that streaming service a video that was available on HBO popped up, she clicked “watch video”, and <poof> we were paying for HBO twice. What you see above and below is a path through the same mistake, but this time it’s using a Chromecast with Google TV device—where creating a watchlist is pretty easy. And your watchlist can hook to your steaming apps, which is great.

Chromecast with Google TV has one of the better interfaces for devices of its ilk. It lets you add your watchlist videos with just a click and then connect to apps you have installed (as well as those you don’t use—look at that “five ways to watch” choice). Dad has a Paramount Plus subscription, so by choosing that “open in Paramount + ” option what ought to happen is the film on my watchlist starts right up. Neat!

Except, that’s not what happens here.

Watchlist Videos on Streaming are getting Scammy

See the choices below Paramount Plus? They’re (potentially helpful) links to two different Showtime subscription channels where you can watch the movie represented in the first picture. Of course, I don’t need that, right? I subscribe to Paramount Plus and my Chromecast knows it. Let’s watch! 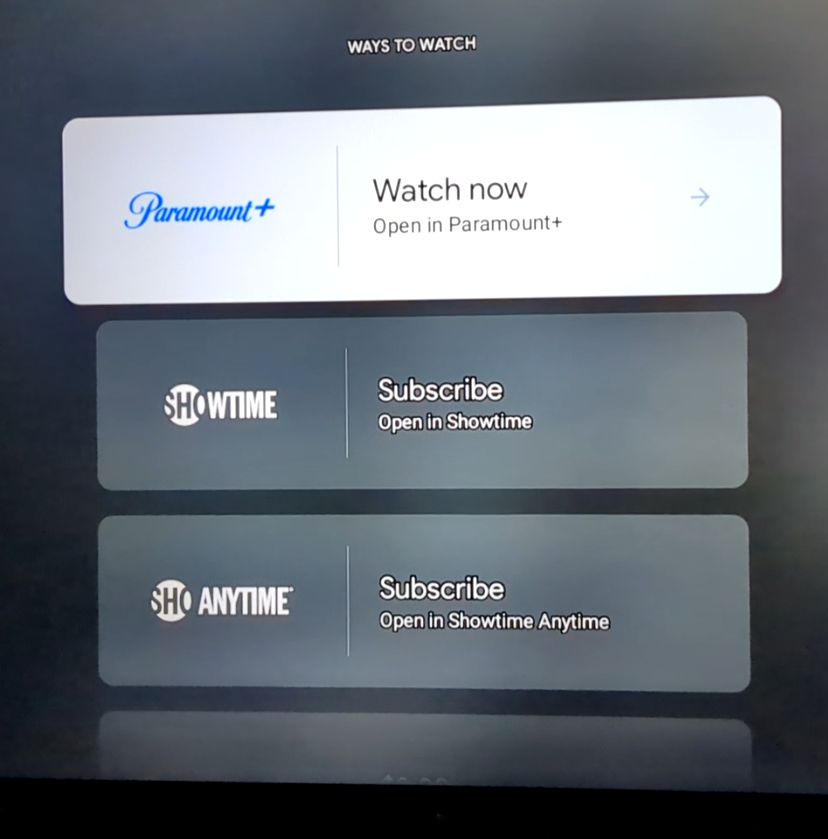 Nope. Paramount Plus and Showtime are both owned by CBS, and when I used that friendly button to watch the movie it opened the Paramount app … and then tried very hard to get me to subscribe to Showtime, which, apparently, is where this particular watchlist video is found. I get this; it’s just like when Prime Video offered to sell my daughter an HBO subscription, and even more so because the services are siblings. But of course it also means “watch on Paramount Plus” isn’t a thing at all—even if you can get from point B to point C through that app.

That’s right: I followed a link to a service I was already subscribed to. My Chromecast with Google TV knew that and sent me to “the right place”. But rather than playing the film, Paramount+ went all up-sellish. And yes, I happen to have Showtime—but not the Showtime app; I get Showtime through my cable company.

It’s a complete disconnect. And no, I didn’t fall for the scam. I went to cable and watched the film I was seeking. But … how many people would have either ponied up the dough for something they already had or had already decided not to buy?

So, my Chromecast know I had the Paramount+ app. It sent me there to watch my chosen programming. and then  … I’m glad I was paying attention, you know? Because Paramount+ is running a scam by claiming you can see a title on their service but only after to try telling you it’s not possible unless you subscribe to another one.

There are other places where the watchlist video thing can fall down. Honestly, since I have both a Chromecast with Google TV and the YoutubeTV app (and those are not the same thing!) there are even more ways for this to get confusing. and <ahem> everyone’s doing it. But the idea of watchlists, multiple ways of getting to and through them, and too many streaming services to keep track of is getting to be a little bit too difficult to manage and keep straight in your head.

Aren’t you glad you have Rent A Dad? Wanna view some watchlist videos together?