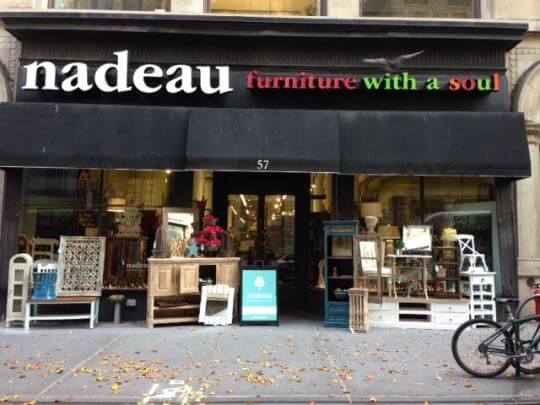 Yesterday I broke a ceramic candlestick.

You’ve probably never seen that sentence before, certainly not on a page at a website about business process and customer service. And I’m hoping you’ll never see it again, because I suspect that the next time I do it I won’t be able to replace the item that today the nice folks at Nadeau Furniture have promised to ship me from their store in Louisville KY.

On Eleventh Street in New York City, there’s a furniture store where we’ve bought quite a few things. Seriously, I don’t think there’s a single room in my home that doesn’t have something from Nadeau Furniture.

In my living room, there happens to be an antique-looking bookshelf from Nadeau, and that bookshelf happens to have a turquoise wash across part of the face. We loved the bookshelf, but that turquoise wash was a problem until we found two turquoise candlesticks at Nadeau Furniture that we placed elsewhere in the room to carry the color. Yesterday, I knocked one over. It didn’t end well.

Nadeau Furniture is an interesting store; everything there looks old but is in fact produced for them to appear that way. This means Nadeau can sell you quality furniture at a reasonable price and it looks special—and because it isn’t mass-produced Nadeau’s stuff really is special.

And Nadeau is steadfast in operating via a very simple business model: they buy things, stock their stores, and sell them. Period. No special orders, no ship-from-one-store-to-another, not even delivery service. Buy something from Nadeau Furniture and while they may refer you to a delivery service, you’re really on your own to get it home.

I knew all of this about Nadeau before I broke that candlestick. I called the store in Manhattan hoping I could replace it, and was told there was no stock but that it might come in again in a few weeks. I presumed that to mean that it never would, and started crawling the Nadeau website in the hope that I could find the candlestick at another Nadeau store and that I might somehow convince them to ship it to me.

I found it, twice. Nadeau’s site claimed that the item was available in both the Columbia SC and Louisville KY stores. I called and spoke with lovely people at both, and was told that the turquoise candlestick of my dreams and nightmares wasn’t actually available in Columbia but that there was one in Louisville. Unsurprisingly, I was also told there was no way for me to get Nadeau to ship me that candlestick.

If you think I’m about to say they should have gone out of their way to take care of me, you’re wrong. As seriously as we take customer service here, we preach business process just as hard and Nadeau simply wasn’t responsible for my clumsiness. And when I reached out to Tom Nadeau I said as much.

You’re very likely thinking I was asking to receive help anyway, and of course I was hoping things might work out that way, but that isn’t why I contacted Tom. Take a look at this. See that SKU number? : 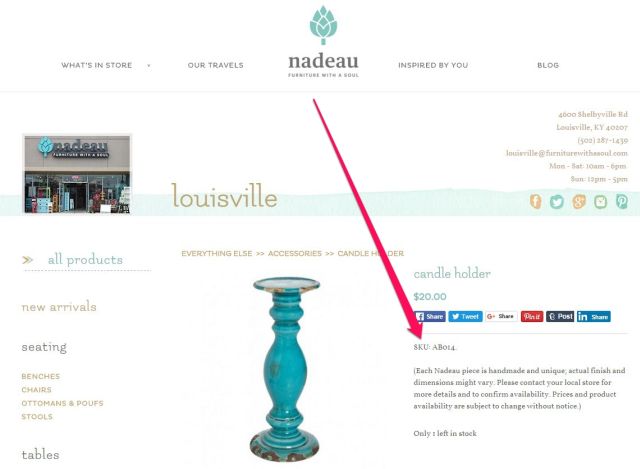 A SKU is a unique identifier that companies use to manage inventory. See the AB014 SKU that the Louisville outpost of Nadeau Furniture uses for my candlestick? It’s the same SKU they use for the same item at Columbia’s Nadeau, which means it’s corporate-assigned, which means there’s communication between the stores—or at least could be—which still doesn’t obligate Nadeau to move things from store to store or offer delivery. HOWEVER: if Nadeau shares their standardized SKU information with the outside world on their public website, it’s reasonable to believe … something.

Which leads us nowhere, except for this: Nadeau had (it’s gone now, and Nadeau’s COO Rob Salmon credits us with pointing out the problem) a contact link for “orders” on their web site.

Orders? At a store that doesn’t take any?

It was clumsy. It was, intentionally or otherwise, misleading. It was simply not OK for Nadeau Furniture to imply they took orders and show their internal, item-tracking information. And here’s why this is a great customer service story:

Faced with this logic, Tom Nadeau and Rob Salmon made changes. No, Nadeau isn’t getting into the delivery game; that’s just not their bag. But Nadeau Furniture, an established company with established business processes, was reactive when the issues in their policies were pointed out. And that’s a big deal. Real Customer Service Hall of Fame stuff.

You knew that, right?

What are you doing about the issues in your business processes that could use tweaking? Want to talk about it?