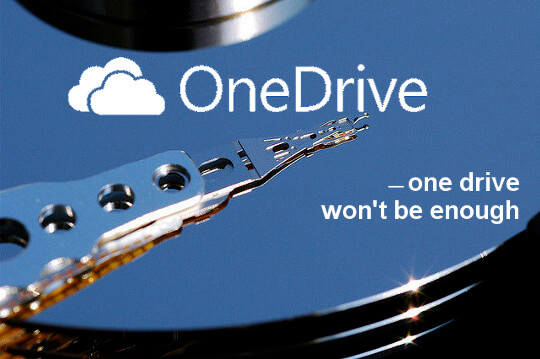 Let’s talk about a word you think you understand—but probably don’t. Courtesy of our friends at Microsoft OneDrive, today’s subject is the word unlimited.

To be fair, with some people hogging over 75TB of storage space, “unlimited” was being pushed way beyond what Microsoft must have had in mind when they made unlimited storage available on OneDrive.

So What Does Unlimited Mean?

Without digressing into too much of a rant about fulfilling customer expectations or customer service, let’s be clear about something: it is of course unreasonable for Microsoft or anyone to provide truly unlimited storage space, for free, as an add-on to a product you’ve purchased, or frankly, ever. And just as anyone who’s ever had a cheap Internet hosting package with “unlimited” bandwidth can attest, unlimited doesn’t mean “as much as you can consume”. In fact, unlimited means exactly what the word says; “you aren’t LIMITED to a specific number”.

We’ve talked numerical and statistical mumbo-jumbo before, starting way back in 2007. Do you think free Wifi is really free? Have you ever bought a Service Level Agreement only to realize that SLAs aren’t worth the paper they used to be printed on?

Up until now, most conversation on this topic has run toward how amazing it is that big companies give away as much storage space as they do—and it is kind of amazing. But in the storage wars Microsoft OneDrive competes with the likes of Google, and while not really; it’s about the value of end-to-end control how Google can afford to do things the way they do, at least Google hasn’t (yet) gone back on their word; if your available space in Google Drive gets lowered to beneath what you have stored there, the account may get frozen, but that’s the extent of things. Microsoft, along with making unlimited OneDrive storage have a limit, has also announced that you’ll have to move your files or risk losing them. Here’s more on the changes to OneDrive.

In business, it shouldn’t be a surprise when the rules of engagement change. And again, “unlimited” never really meant unlimited. But completely pulling the rug out from under your customers is never a good idea. Expect to see Microsoft alters their plans.